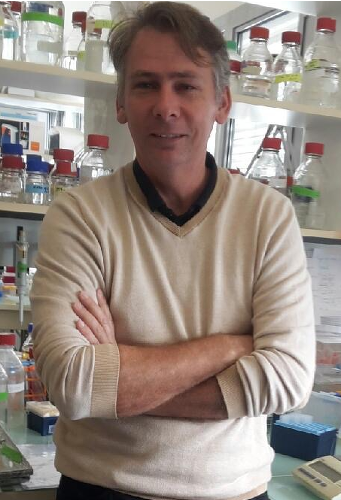 Laurent Le Cam is a research director at INSERM and a group leader at the Institut de Cancérologie de Montpellier since 2008. He initially studied different mechanisms driving cell proliferation, in particular those related to the activity of cyclins and cyclin-dependent-kinases (CDKs), first in Montpellier as a PhD student at the Institut de Génétique Moléculaire de Montpellier in Dr. C. Sardet's group, and then as a post-doc in Pr Sicinski's laboratory at the Dana Farber Cancer Institute in Boston. After realizing that many cell cycle regulators he was studying also control cell metabolism, he decided to move to the field of onco-metabolism which is currently the main focus of his laboratory. More specifically, L. Le Cam's team is interested in new regulatory mechanisms of the p53 pathway, a tumor suppressor pathway that plays essential roles in carcinogenesis as well as in several human developmental syndromes. In the past years, his laboratory identified atypical functions of several key components of the p53 pathway (p53, E4F1 and MDM2) in cellular metabolism and demonstrated that these metabolic networks are implicated not only in carcinogenesis but are also important for normal tissue homeostasis.